Don't Get Mad, Just Get MAX 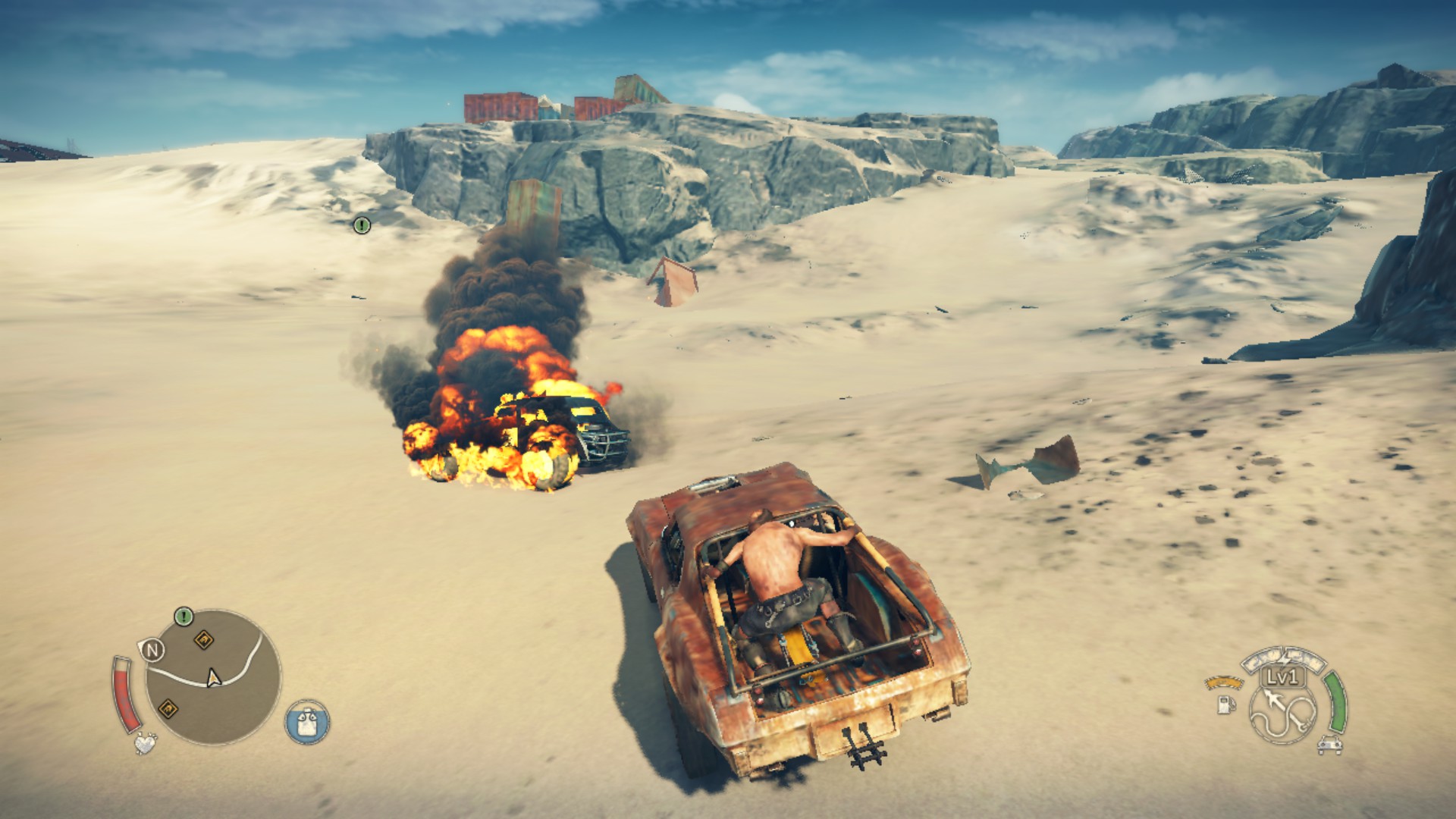 I gunned the engine and used the last of the nitrous in the pathetic hope I could get more... more speed... more distance... more velocity... more damage... more "nothing" put between me and the hellish ambush unfolding around us.

Chumbucket and I have a very special relationship.

I ignore him, trying to negotiate the hazardous terrain (rocks, concrete chunks, outcroppings of the rusted carcasses of other travelers who succumbed long ago), all the while fearing a sudden descent into nowhere, fast; hitting a cliff precipice and flying face-first into oblivion isn't on my to-do list for today.

My eyes are straining through the storm, looking for any sign of a landmark; we are well off the mini-map's dirt-track trade routes. I catch a gmiplse of (what I think is) a firelight on the impenetrable near-middle-distance horizonless visibility field of the storm. Breaking Jack Burton's biggest rule ("never drive faster than you can see"), I gun it towards "there," hoping "it" still exists by the time arrive.

Really, what other choice did I have?

These musings were nocked from my mind as the first buggy hit us: exploding from the vast nowhere static-sea of the storm, its spiked bumpers t-boned into our driver's side, sending us pinwheeling across the soft, ocean-bed sand.

Spinning the wheel, now trying to counter, as well as recover our course, I gunned the nitrous system, the Opus having spun 300-and-change degrees sideways, I roared past the driver's-side of the buggy and back into the storm... only to suddenly collide - head-on - with the buggy's wingman. There was a momentary ghasp of a silent "oh-shit" before the "BAM:" the buggy transformed into an exploding wreck of a twisted fireball which seemed to vault over my front bumper, shattering and clawing and screaming into hundreds of bits of wreckage gibs, lost instantly in the swirling sandstorm.

Clearly, I should have listened to Chumbucket to begin with, but the battle upon us now - the "ROAD WAR" of song and story - I gunned the engine and used the last of the nitrous in the pathetic hope I could get more... more speed... more distance... more velocity... more damage... more "nothing" put between me and the hellish ambush unfolding around us.

Two more bare-metal buggies burst suddenly into the clear-blue and blaring desert vista that exploded before me as we out-ran the outer-edge of the sandstorm. The landscape was jaw-dropping: Formerly an ocean-bed, now a sea of a different kind: of waste, privation, starvation, depravity, thirst, and incsolable desolation, its hideous, savage, and infinitely patient beauty still dazzled me, even as the two speedsters criss-crossed the dunes before me, spewing dust like high-velocity fireflies of death.

"Fuck this, you motherfuckers," I shouted.

As Chumbucket readied the harpoon, I jockeyed into position between the two of them, slow-mo-ing us perfectly for the single second necessary for Chum to take his shot.

What follows happened in under two seconds:

CLANG! The harpoon sailed through the empty rear-window and through the front seat, neatly impaling the driver through the chest in the process. The harpoon retracted just as swiftly as it had arrived, ripping the (now hopefully dead) man out of the back of the vehicle, just as the other buggy swerved directly in front of me, following a trajectory that quickly made the vehicle cross the cable, casually crushing the corpse caught on the end of it. Meanwhile, the buggy we had harpooned had already spun out of control, reeling sideways, the front grill turning with balletically-timed perfection into the front-end of his friend's car, causing both to explode instantly. It was hundred percent poetic-justice-carnage: As their tires blew out from wheel-wells, and their gastanks burst into glorious-clouds of smokey-fireballs of death and destruction, I swear - to this day - I could hear Mozart's Requiem playing in the background, before realizing that it was actually the sound of my own voice screaming in ragged exaltation, "HOW DO YOU LIKE ME NOW?! HOW DO YOU LIKE ME NOW?!"

The game, of course, is "Mad Max," another fantastic Linux port of another triple-a E-FUCKING-TICKET-game from Feral Interactive. Although the game launches (first-time) with warnings about incompatabilities with your distro (unless its Ubuntu 16), and follows them with subsequent warnings about potential graphics card problems (unless - and I shit you not - you're running an Nvidia 660), I chose to ignore them both and see if it would run (Mint 18, GTX 970) and I've been going ever since. My advice? Do likewise - worst case scenario, you can simply return the game to Steam if you run into any unexpected problems.