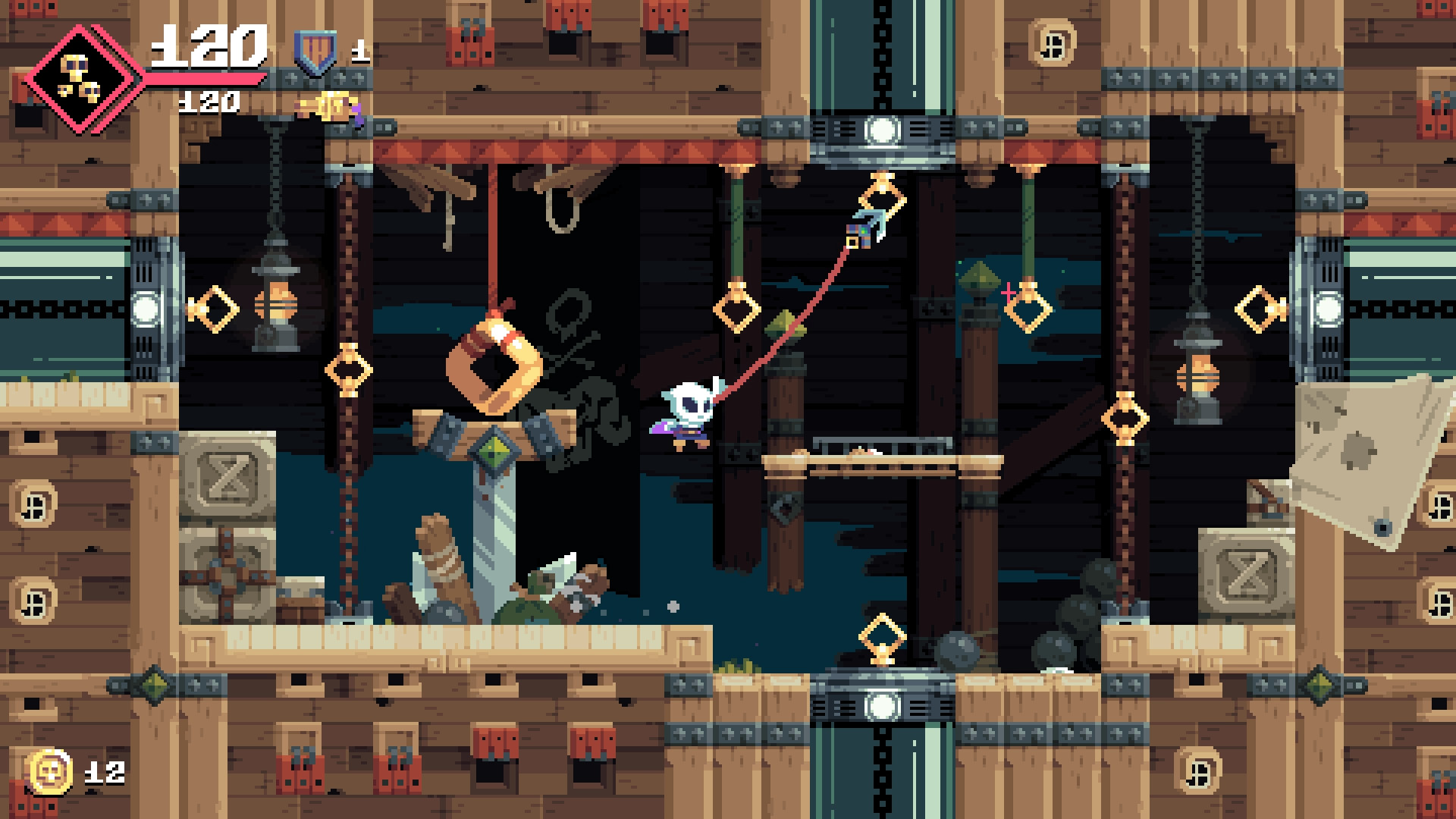 Flinthook has a lot going for it: one of the only sidescrolling, procedurally-generated, rogue-like, traditional-platformers made during the Steam Era of Linux gaming, it advances the same design ethos as its excellent progenitor, "GoNNER," by adding numerous play mechanics to the mix. These include the (constantly-used, pervasive, and inventive) hookshot grappling hook (a play mechanic which I firmly believe no game should be without), upgradeable/tweakable blaster pistol, and the limited ability to slow down time using Flinthook's ChronoBelt. Add the delightful Neo-Pixel pseudo-16-bit visuals, the wonderful and whimsical anthropomorphic space pirate theme, and the upbeat color palette, and you got yourself a recipe for success in (and deep breath here) the world's first: procedurally-generated, rogue-like, sidescrolling platform, grapple-hook, time-bending, Neo-pixel, retro-traditional, non-linear, shooter with rogue-RPG/permadeath upgrades and repetition-based flow-style.

In most universes, a game whose classification runs that long should be enough - especially if it is good. And "Flinthook" is definitely very good. But wait... THERE'S MOAR:

While all of this polish and craftsmanship and excellence in character design, play mechanics, style, and the whole experience overall just shines smiles at you from a thousand wonderful surfaces, the thing that really makes the game for me is one of the simplest, subtlest, easiest-to-overlook quiet mechanics, an addition to a game already stacked with additions, but one which nonetheless puts the quality maximum-goldness effort-cherry on top of the already delicious space-pirate sundae.

Behold, friends and neighbors, the lowly combo-counter: a simple numerical indicator of the number of hits you've landed on your enemies in sequence since the last time, yourself, have taken damage.

Unadorned with any flashy 16-bit zing, and extant in the game only with the charm of a digital alarm clock with a fancy font, it is this combo counter that makes "Flinthook" complete for me.

See, when you are grapple-hookshot-swinging and jiving like a lightening ninja through the game's forever-new rogue-like rooms, blasting away enemies whose patterns are just on the perfect side of the complex-enough-to-hurt-you/simple-enough-to-be-memorable scale, it's very easy to get lost in the loot accrued, the mindless space-blasting, the endless assortment of traps and room patterns and other accouterments of the game. Add into this the ability to slow time to a crawl (think the sidescrolling platformer equivalent of Max Payne's patented Shoot Dodge), and, in short order, the game would collapse in on itself in a big mushy pile of happy-colored space pirate-grapple-goo - like a bad first layer on a 3D print, resulting in endlessly spiraling swirling curlicues of madness that add up to nothing.

But, with the simple addition of the combo counter, every single thing you do in every single second of the game's dungeons is transformed from yet another disjointed and meaningless spiral of filament and turns it into a long, long, long, long, long series of ballet-like meaningful gestures, each one evincing the player's skill and artistry, as they dynamically solo over the game's surface. Sure, the game is challenging (in fact, it's almost perfectly balanced in its deceptive challenge), but it is fairly easy to tactically work your way through most rooms and dungeons, taking damage as you go, arriving safely at the end.

However, it is a different fucking meta universe entirely to be able to do the same thing (each run being unique and different and unpredictable) without getting hit; you will have to marshal every ounce of concentration, reflexes, strategy, skill, memory, and badass-space-pirate-bounty-hunting twice-grapple-hook, time-slowing, spinning, acrobatic, blasterizing acumen you have to get that counter to go up... and it's in this that "Flinthook" truly shines and pushes the player to moments of great (albeit simple-seeming) freeform artistry.