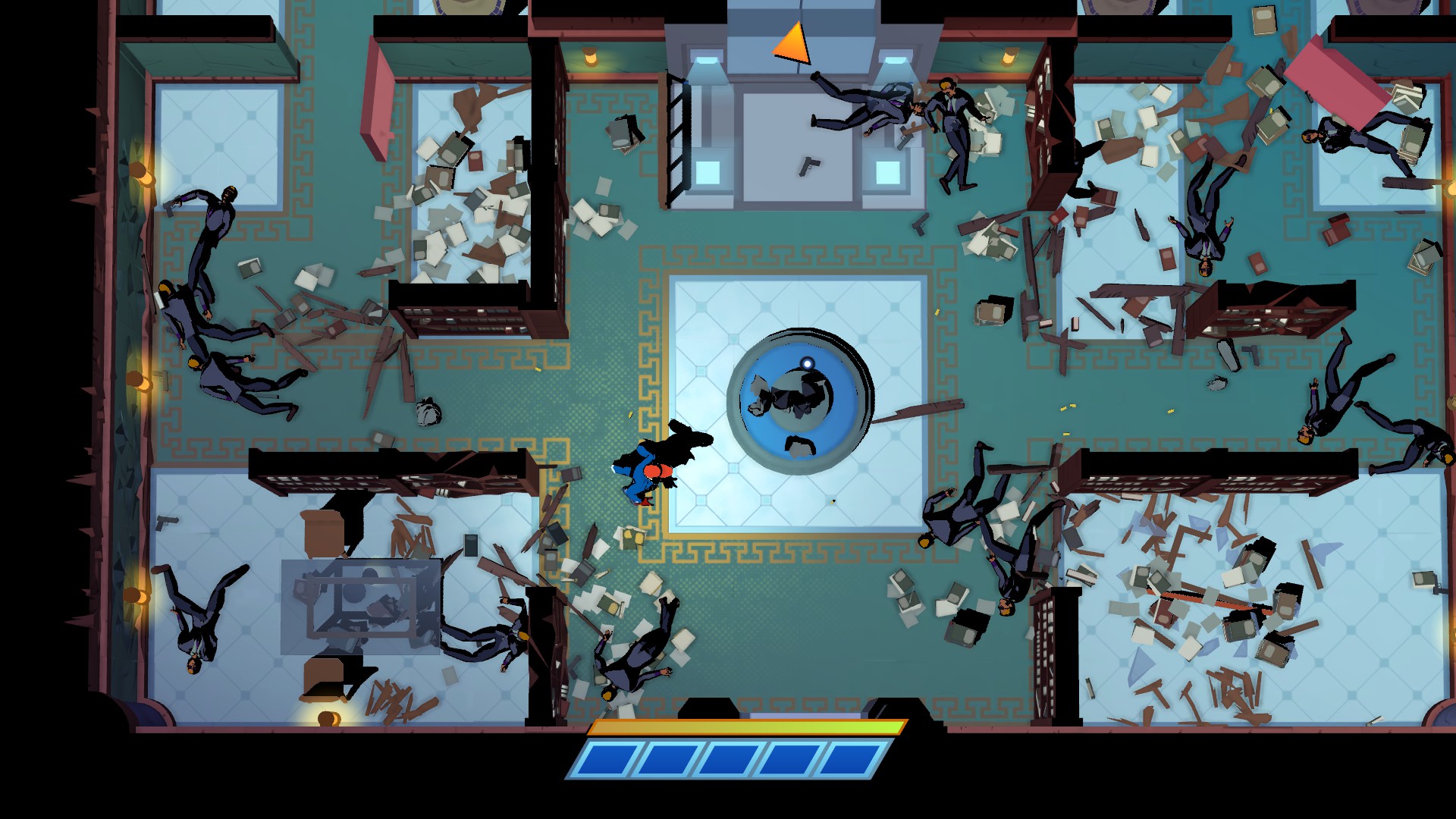 The end result is Jet Li/Bruce Lee teleporting point-to-point remorselessly throwing people through windows, two-punching their faces so hard they embed into walls, and causing unstoppable, incalculable havoc in a top-down vengeful love-letter to the hypothesis that a war of guns versus kung-fu would have ended so much differently if only kung-fu could bi-locate.

It's impossible for any fan of Mystery Science Theater 3000 to not fondly recall the episode in which Joel and the Bots eviscerate the hyper-violent, tone-deaf, nihilistic love-letter to anti-continuity, "The Gunslinger."

In one of the host segments for that episode, Tom Servo explains Roger Corman's directorial and production design technique without the benefit of Occam's Razor, answering the question "how are people apparently teleporting through buildings at will?" Obviously, the simplest answer is Tom's (heretofore hidden) ability to bi-locate by quantum manipulation of one's origin across space and time. To Joel's amazement (and eventual horror), Tom Servo says one thing in one position on the show's set, zooms off camera, and appears nearly-instantly in a variety of positions demonstrating hilarious imagination and virtuosity never-before-seen in the field of Theatrical Puppetry (which, as we all know, is the greatest craft and art-form second only to book-binding, poetry, music, and video-games).

Enter "Mr. Shifty." Where? Here. Huh? OVER THERE! What? Behind you! There? To your left!

For those who found "Max Payne's" manipulation of time in order to dodge bullets merely the intriguing entre to an entire genre of realistic portrayals of potentially devastating capabilities in the normal, physical world, once one can gain control of even the most simple of supernatural mechanics, "Mr. Shifty" has finally arrived.

Facing a highly organized, heavily-armed, alerted-and-ready army of deeply entrenched corporate security forces, Mr. Shifty enters their gleaming sky-scraper unarmed, unarmored, wearing a ball-cap and a smile. And he makes them all die.

There are two basic premises operating here: the first is that Mr. Shifty can instantly shift (or "blink") his location at will, bypassing any obstacles or physical matter between himself and his destination. He can do this as fast as the player can order him to do so, and is limited only by the range of his "shifting," and a cool-down period once he has shifted five times without pausing.

The second premise is that Mr. Shifty is capable of incredible acts of raw physical violence using only his hands (or ordinary office objects). The amount of damage he can inflict to his opponents and the environment is profound, decisive, crisp, graphic, and wicked-pisser cool.

The end result is Jet Li/Bruce Lee teleporting point-to-point remorselessly throwing people through windows, two-punching their faces so hard they embed into walls, and causing unstoppable, incalculable havoc in a top-down vengeful love-letter to the hypothesis that a war of guns versus kung-fu would have ended so much differently if only kung-fu could bi-locate.

There are few things as satisfying as suddenly appearing in front of a conga line heavily armed shooters, waiting for them all to draw a bead on you, then vanishing as the last in line executes the entire squad. Just as excellent is the ability to use anything that isn't a firearm (cause, well, Mr. Shifty, and stuff) as a ranged weapon. Hurl a pillow with such force as it kills a beefy interrogation gorilla, pick up a coffee cup and break it across someone's face, wield metal poles and brooms with lethal efficiency. It is awesome.

Probably my favorite thing about Shifty is that the game is at its best when it's at its hardest. The mid to late quarter of the game positively sings with the screams of gunfire and chaos of your opponents. And, even though Mr. Shifty is a pretty short ride (I beat it in about 6 hours), it is deeply satisfying. My one complaint is that the very last chapter of the game gets a little too mind-bendingly difficult for my tastes, but it's nothing Shifty can't handle.