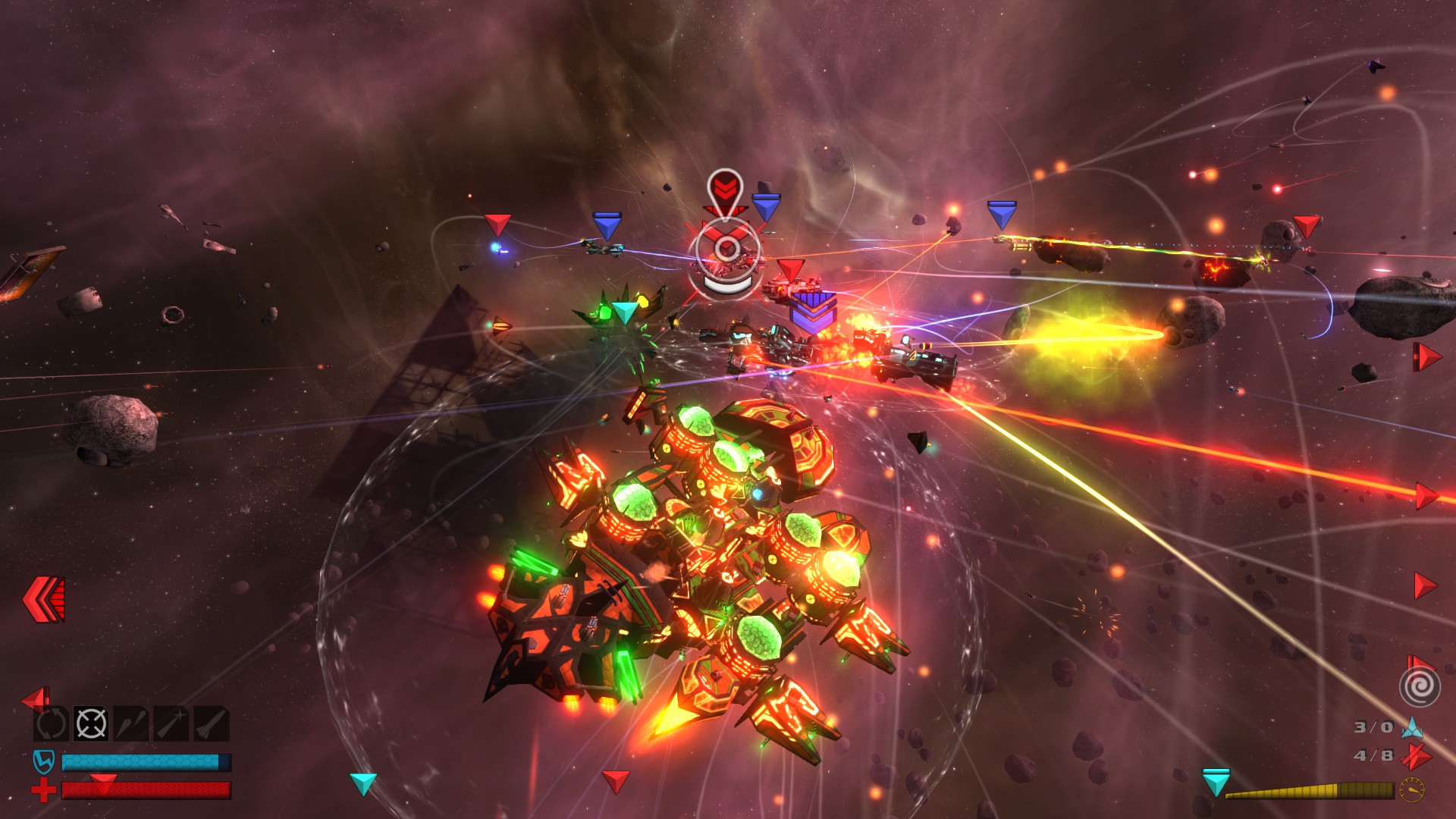 "SPAZ2 meets the major criteria towards which all great games aspire: as easy to learn as gravity, but as difficult to master as acrobatics. Its excellent balance of universe-map-strategy, ship design, storytelling, hilarious dialogue, and constant, visceral, immediately-available high-resolution stra-tact-o-carnage commends its addition to any devout gamer's library."

I never got to actually play the first "SPAZ" ("Space Pirates and Zombies"); it never wanted to cooperate with my multiple monitors on Linux. It hurt my emotional parts to be excluded from a game that the majority of the Interweb-speaking peoples of the world widely regarded as (to use their slang) "rad." Damned beatniks... but I digress.

Thus, when the sequel was released earlier this week, I jumped: first with joy, then with both feet, directly immersing myself in the game's insanity. Even though (apparently) a direct continuation of the plot of the original, and in spite of my arrival halfway through the story (which, shockingly enough, focuses heavily on a conflict between pirates and - spoiler alert - zombies, set mostly in space), I was instantly made to feel at home amongst the game's numerous, distinct, memorable, and frequently nose-sprayingly-hilarious characters.

Players take on the role of Captain of "The Metal Mother," fresh from its victorious eradication of the zombie-plague as depicted in the previous game. Now facing a fractured and deeply factionalized universe, your job is to re-engineer and expand your ship, forge alliances, destroy enemies, gather resources, and fight like a rapacious son-of-a-bitch. All this, while juggling the endlessly jagged edges of your crew-members and their universal mutual hatred (the bonding agent on which your relationship is based), you bravely assault the endless void, ever-vigilant against the potential re-emergence of the zombie plague - a nefarious symbiotic entity that transforms all it touches into its subordinate slave.

It sounds complex. Overwhelming, even. But it's not. SPAZ2 has been painstakingly designed to be terse, simple, fast, exciting, ultra-polished and absurdly addictive. Every aspect of the game reflects this ethos: Tutorial elements are rolled out at near-perfect intervals, and are incredibly to the point. Even better, the game's fantastic dialogue (and well-above-average voice acting) helps to conceal the fact that you are actually learning how to do stuff, so much so that, it wasn't until my 16th hour of gameplay that I was struck by the sheer amount of complexity I was actually managing.

The magic of this deep-yet-simple (i.e. "perfection") design shines throughout.

Ship design and modification, for instance, takes place in a VR-optomized, 2-buttoned drag-n-drop of your in-combat ship view. At first, it's pure WYSIWYG sublimated: self-snapping parts, consisting of only a handful of component types (right wings, left wings, sub-cores, noses and engines). Before you know it, you are 20 hours into the game, and are spending endless time obsessing over the infinite combinations of weapons, damage types, and defensive characteristics that come with each individual component. By the time you are actually contemplating these things, you already know how to use them; it's like a Jedi mind-trick: you learn nothing, but, in doing so, learn everything, and discover a much larger world that's governed by forces which you previously only felt, but now you truly understand.

Don't worry, though: the path to this epiphany is paved with one word: fast, fast, fast. You will spend most of your first 10 hours exploding humongous chunks of enemy spacecraft in a strategic riot of gratuitous (yet irresistibly delicious) particle effects, lens flares, and 3rd-person simple-seeming real-time sci-fi carnage. Even though you will find yourself controlling and designating targets for (literally, dozens) of drones (which also have drones), while trying to squeeze every ounce of carnage out of your on-ship weaponry, the learning curve remains subnormal-Neanderthal-flat.

SPAZ2 meets the major criteria towards which all great games aspire: as easy to learn as gravity, but as difficult to master as acrobatics. Its excellent balance of universe-map-strategy, ship design, storytelling, hilarious dialogue, and constant, visceral, immediately-available high-resolution stra-tact-o-carnage commends its addition to any devout gamer's library.