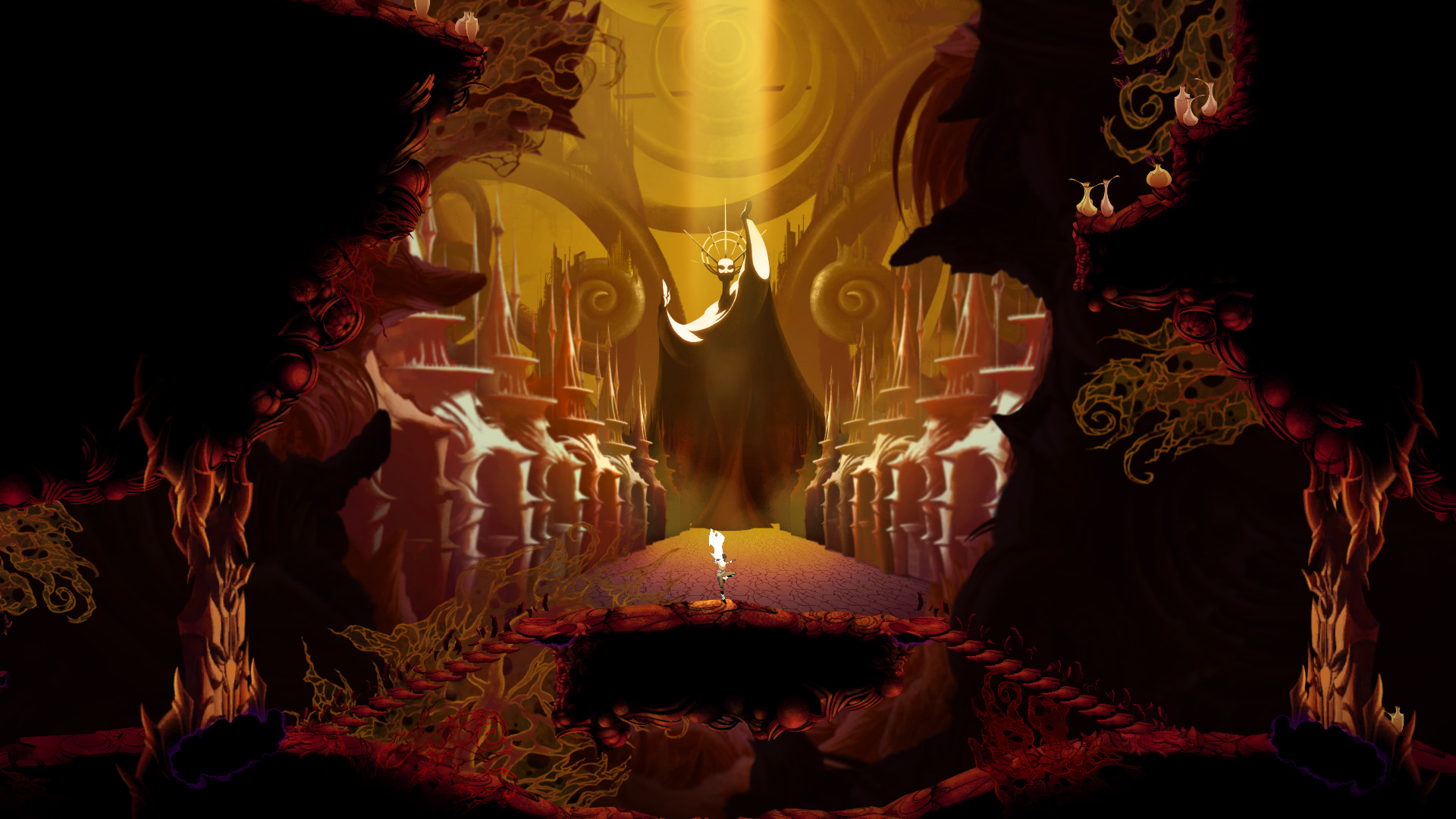 "...the biggest complaint I have with "Sundered" is the way the game structures enemy encounters. They happen very frequently at random intervals if you stop moving, and can best be described as suddenly being attacked by a giant swarm of whatever lives in that area."

The keyword in that sentence is "strange." Everything about this game is just the slightest bit "off," and, after just under 3 hours of playtime, it's hard to determine which aspects of the game were designed with this goal of strangeness in mind - and which parts just accidentally ended up being so fucking... well, odd.

We'll delve into details in a moment, but the other salient thing you need to know is that it is really and truly beautiful (in a strange way, of course). Your character's sprite animations alone come close to being a masterclass in the form, with each action so fluid, yet so clearly defined, that it's hard not to want to play the game. You dive-roll, leap, stab, and just generally play the game in a state of what I can only describe as an endless string of pure florid flourishes. However, these flamboyantly obvious curlicues feel more like a constant enbu of the animation team's prowess and skill rather than your character's actual efficaciousness in either combat or acrobatics.

That aside, let's talk about the strange:

Billing itself as an "epic" experience ready to hit gamers with a "horrifying fight for survival and sanity," "Sundered" (at least, so far as I have played) is in no way "horrifying." The geography you traverse is (at its scariest that I've seen) at most a dreamlike juxtaposition of nature, magic and futuristic scifi technology that doesn't set you on edge with it's eerie weirdness so much as it just awkwardly cloys at the corners of your consciousness: while the game's procedurally-generated levels offer the prospect of a fluid, non-linear, endlessly-varied and replayable game, the algorithms which generate the map are just a little bit off, leaving the player feeling both perpetually lost, torturing them with perpetual deja vus awakenings in totally familiar screens. In spite of the fact that "Sundered" does a better job of procedural generation than "MegaSphere," (in that MS regenerates the terrain on death, while "Sundered" seems to generate it only once, at the start of a new game, after which, the map is static to that save slot) players will find themselves saying things like "is this just the same type of psuedo-room-tile as the one earlier, or is this actually that room tile from earlier, or is it a new one entirely, and, either way, am I going in the right direction?"

Luckily, this is mostly offset by the game's intuitive, LT-bound map overlay, which presents you not only with a clear picture of where you've been already, but has nice highlights, icons, and simple symbols to keep you heading towards the next new thing/area/powerup/boss/unlockable door. Still, the perpetual deja-vus can get confusion as you slowly lose your mind.

Finally, the biggest complaint I have with "Sundered" is the way the game structures enemy encounters. They happen very frequently at random intervals if you stop moving, and can best be described as suddenly being attacked by a giant swarm of whatever lives in that area. While the frenetic mashing of the attack button is punctuated by must-be-timed-perfectly employment of the dodge button, and while the game actually does require some degree of skill and nuance, I felt that the combat was lacking something. This sensation is not at all alleviated by the repetitive and constant - and, very often, totally unfair - screen-extending swarms you spend most of your time battling.

These drawbacks are offset by a highly addictive and (initially) cool upgrade system: when you die, you are taken back to the start of the game, and can then spend your accumulated tokens to unlock numerous areas of the skill tree. Unfortunately, the actual upgrades themselves feel far less exciting than they should be, favoring mostly incremental passive upgrades to health or armor or shield regeneration. They come in such small doses that they go almost entirely unnoticed once purchased - especially as the opposition gets much more difficult as you progress further into... wherever the hell this story takes place. Ultimately, it makes the skill tree feel flat, almost as if all the points you've spent have been carefully calibrated to enable you only to get to the next, predictably and finely calibrated swarm. Rinse, wash, repeat.

It may not be the most original, nor the best executed game in the neo-Metroidvania field, but on the whole (and so far), every deficit and flaw in the game has been countered by an equally persuasive positive foil (repetitive use of duplicate map tiles is countered by the excellence of the mapping system, for instance). Overall, while many gamers will notice and be irritated by some of "Sundered's" shortcomings, it's visual beauty and pick-up and play mechanics make it a strangely addictive experience. Stay tuned for a review in later episodes. Till then? Try some strange.